Get 50% off your first three months' rent for a limited time. Click here for more details.

back to news and events 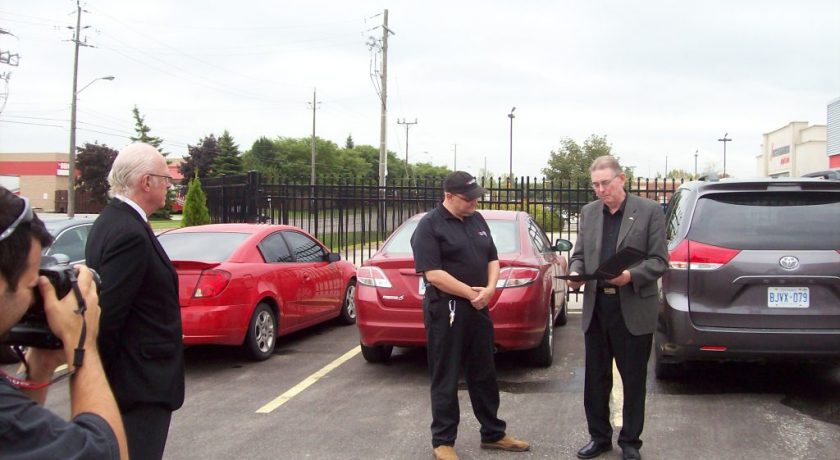 BRANTFORD ONTARIO MAYOR MIKE HANCOCK SURPRISES ALL CANADIAN SELF STORAGE GENERAL MANGER BY PRESENTING HIM WITH A 25 YEAR SERVICE CERTIFICATE.
Brantford, Ontario – September 22nd 2010: Mayor Hancock visited All Canadian Self Storage on Dalkeith Drive to personally present Dan McGuin with a certificate that honoured his 25 years of service at the same storage location. Owners John Donald and Hal Spradling, along with fellow General Managers of All Canadian Self Storage locations, looked on a as surprised Dan McGuin received his tribute.
Dan started his career in storage in 1985 at the Dalkeith Drive location as an eager 25 year old Site Manager. Married with 2 sons, Dan’s commitment to his job and community took root where Dan has been actively involved in the Brantford community with charitable donations and support of local youth sports teams. Dan’s son, Matt, now follows in his father’s footsteps working alongside his father.
In an era when five years of service is a rarity, All Canadian Self Storage is delighted and proud of Dan’s dedication to company and community. To honour Dan and his 25 years of commitment to our company and the Brantford community, All Canadian Self Storage will be hosting a charity BBQ with all proceeds going to the Steadman Hospice. For more information about All Canadian Self Storage or the Steadman Hospice charity BBQ, please call 519-756-8000 or email [email protected]

subscribe to our newsletter
and get one of these free gifts

You will receive a confirmation email shortly
with instructions on how to claim your offer.

need help? check our help center for frequently asked questions or speak to a
customer service representative by calling 1-866-310-1999